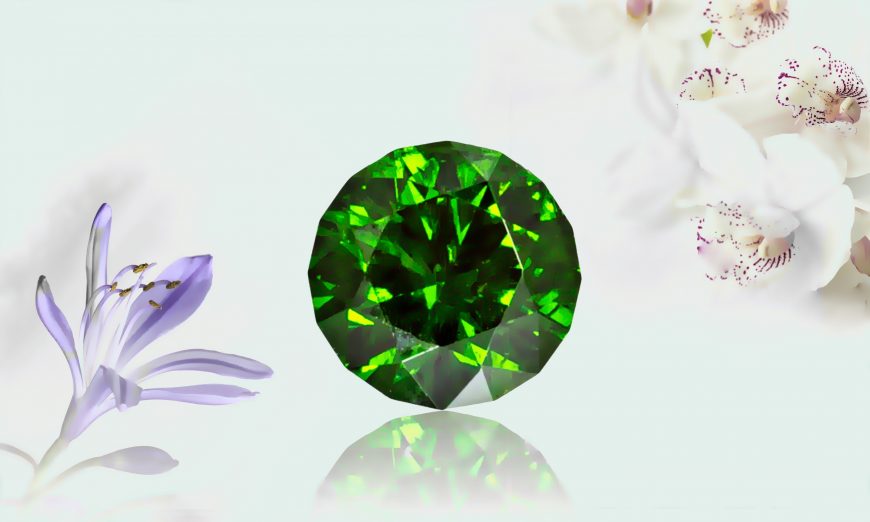 Demantoid Garnet is one of the rarest and most precious gemstones in the world. It was first discovered in 1849 by Nils Gustaf Nordenskiöld in the Ural Mountains of Russia. It wasn’t long before the gemstone became famous for its fascinating brilliance and lustre. It was therefore suitably named ‘Demantoid’ which means diamond-like. The Russian Tsar family grew fond of the unique gemstone and it was regularly used by their famous jewellery designer Carl Fabergé in his stunning creations.
After 1996 other deposits of gem quality products were uncovered in Namibia and Madagascar. However, as the colours of these products consisted of a pale green and yellow, they were of less quality and value in comparison with the beauty of the Russian Demantoid.
The Demantoid was first found in Iran (Persia) around the year 2000. There was little known about this exquisite gemstone at the time, and it was believed to be an unknown ancient treasure because of its beautiful natural hexagonal shape.
Horsetail inclusions are a fascinating feature that only a small number of Demantoid Garnets possess, which contributes to their rarity. Horsetail inclusions received its unusual name because the feature resembles a bundle of golden threads that appear to explode from a certain point and can form a shape similar to a horse’s tail. They add a special effect to the gemstone, blessing it with a unique glow. Demantoid Garnets that have horsetail inclusion are of high demand and therefore stones with such inclusions are more desirable and of greater value. The horsetail inclusion feature is exclusively found in Persian and Russian gemstones.
Many of the Persian gemstones are also endowed with unique characteristics that have not been seen in any other gemstones. For instance, the vibrant yellow and green colours can sometimes infuse together to make a beautiful work of art, such as the image below. This is a one of a kind stone that resembles a mystical eye.
Size:
Demantoid Garnets are usually very small. Due to the fact that cut stones usually weigh less than a carat, sizes above two carats are very rare and valuable. For example, a rare 5.5 carat Demantoid Garnet ring was sold for 170,876 dollars in an auction in Hong Kong.
Features:
Hardness (Mohs Scale): 6.5-7
Refractive index: 1.880-1.889
Crystal shape: Cubic
Dispersion: 0.057
Dispersion shows the ability of the gemstone to bring out different colours; it is also known as the stones “fire”. Demantoid has one of the highest dispersion among all gemstones and is even ranked higher than the incredibly valuable gemstones Diamond, Ruby and Emeralds.
Diamonds dispersion: 0.044
Ruby dispersion: 0.018
Emerald dispersion: 0.014
Refractive index is a scale that shows how much slower the speed of light is in the gemstone compared to the speed of light in the air. The higher the refractive index gets the more brilliance the gemstone will have. Demantoid Garnet has a high refractive index of around 1.885, which is higher than most gemstones but less than diamond, which gives it a great lustre and brilliance.
Diamond:2.417 – 2.419
Ruby: 1.762 -1.778
Emerald: 1.565 – 1.602
Demantoids unique features have made it one of the most valuable gemstones in the world.